Plone is a Python-based open source content management project actively developed since 2002. It is available in more than 40 languages, and comes with 196 add-ons. Plone has had over 89,000 commits made by close to 800 code contributors, representing close to 1,250,000 lines of code.
... Trusted by the CIA, FBI and Others: The Central Intelligence Agency and the Federal Bureau of Investigation have chosen to trust their websites to Plone. Additionally, the government of Brazil, NASA, Disney and many other schools, governments and businesses around the world have chosen Plone for secure, enterprise web content management."
-- Plone: security statement

Within the reconnaissance & research phase, we've stumbled upon a recently disclosed security advisory posted on Github, related to an XXE vulnerability (Improper Restriction of XML External Entity Reference in Plone).

In this write-up, we go into more detail on how we found an authenticated RCE vulnerability in Plone and how we ended up exploiting it - PoC included!

In order to get up and running quickly we've decided to make use of the official Docker image for our local Plone lab:

After spawning the docker container and creating a new Plone site, we started exploring Plone's features. Spending a good amount of time playing around with the plaethora of features in Plone, we started focusing on the Theming feature.

While skimming through Plone's Theming Manual, we learned about an interesting feature available to theme authors called TALES expressions.

Appendix C: 27.11. TALES Overview provides an overview of different TALES expression types which we can make use of in our templates:

We started digging further into RestrictedPython with the main focus set on understanding the "security-restricted" environment under which python expressions are executed.

Zope, the foundation of Plone, makes use of RestrictedPython to closely control what a theme author is allowed to execute within a python expression. In essence, the Python expression is compiled and later executed (via eval) with a limited set of globals available. Some globally available functions, like getattr, setattr and delattr are replaced with custom wrapper functions to enforce even more strict validation of what can and cannot be performed.

To get an idea of what is available to us inside the restricted environment, we edited /plone/buildout-cache/eggs/cp38/Zope-4.5.5-py3.8.egg/Products/PageTemplates/ZRPythonExpr.py (inside the docker container) to dump the globals argument passed to the eval statement.

We ended up with the following output (shortened for brevity):

After inspecting the string, math and random Python modules, we found a potential way of executing arbitrary code:

But this violates one of the security environment's constraints, we are not allowed to access objects whose name starts with an underscore.

After pondering for a while and reading through the documentation on theming in a bit more detail, we learned that a subset of TALES expression types can be used inside the TALES python expression itself, as outlined at the end of chapter "27.16.2.2. Built-in Functions":

After experimenting with other TALES expression types available inside the python expression, we realized that the underscore restriction is not enforced in path, string, exists or nocall. In other words, we can get a reference to random._os.system via the nocall expression type. 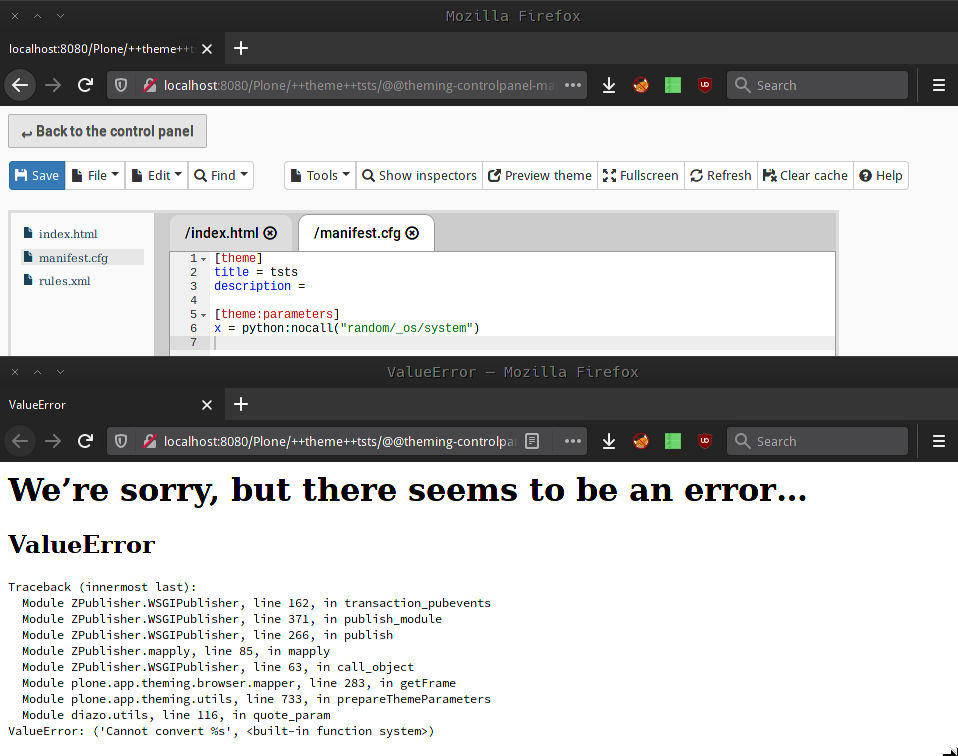 This was the missing piece of the puzzle.

All we need to do now, is call the system function with a command of our choice.

The following steps lead to exploiting this vulnerability:

... and finally catch the shell:

To showcase the exploitation of this vulnerability, we've developed a PoC which will spawn a reverse shell. Head over to the cyllective/CVEs Github repo to check it out.